skip to main | skip to sidebar

Ode to a Beater Board

I have owned a few new surfboards. Shiny , glossy perfect and free of wax, dings and salt water. They are untested and like a new car you almost hate to wax them up or maybe you think twice of riding it because the surf is rough and closing out.

And then at some point it gets the first ding or scratch and another it maybe the newness is replaced by another. Maybe it gets traded in and becomes someone else's new board.

Surfboards should be ridden and though cared for and repaired , still taken out and enjoyed. So... The lowly beater board has found this place where , if you get over the fact that its not shiny and new. Or perhaps it's some old style and design... It's also carefree. It's ridden with gusto and chance is thrown to the waves. It's ridden and enjoyed just like the surf shop fresh off the rack beauty you saved up for but are afraid to ride s supposed to be...
Posted by Larry at 10:29 PM No comments: 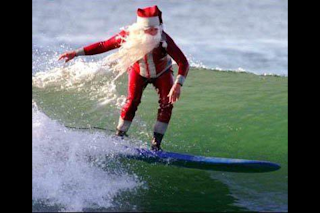 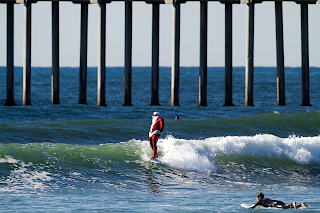 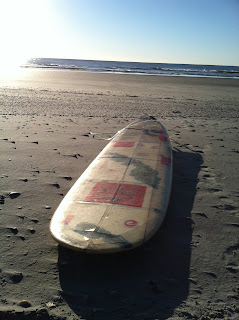 A birthday near he ocean is as good of a way to get things rolling on the blog again as any. Surfed twice yesterday in small shorebreak. The cold water trickling in the wetsuit was a reminder of how removed I feel from the ocean when I'm in a wetsuit. On the way back up the boardwalk I talked to a group of women who were curious about the water temperature and wetsuit. They even got a group picture with me... Somewhere I suppose I am immortalized in a phone's memory...
Posted by Larry at 8:17 AM No comments: 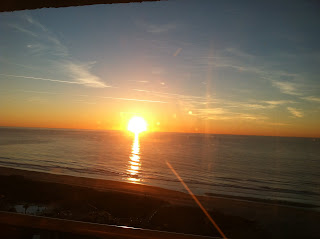 Lifestyles of the Rich and Famous

Life's a waste of time and surfing's as good a way to waste it as anything. Miki Dora

Lifestyles of the Rich and Famous
We think of wealth and fame in terms of dollars, lavish material things and how widely your name is known or what magazine covers you picture is on. It’s easy to be captivated by all of that or at the least just curious about the fairy tale lifestyles of Kelly Slater, Lady GaGa (that one is for the Mrs.), Michael Jordan, Bill Gates or the Jonas Brothers (and that one was for my littlest surfer girl). This desire for a little piece of that world is how we sell things…being “cool” by association is a marketing miracle. It is why you can find more kids wearing Hurly, Billabong and Quicksilver in landlocked Midwest states than you probably can find here in the coastal east. And who can blame them...the surfing lifestyle can be as addictive as the act of riding a wave. Not quite, but close.
The true surfer, dedicated to the surfing spirit and lifestyle may live a life more adventurous, but I certainly don’t mind the tradeoffs I have made in life to give my family a little security. No, I don’t make every good day of surf (I still can’t believe I missed last Tuesday), but I can measure my trek to the beach in minutes not hours, I have a little quiver, I have my health and yes, I surf whenever I can which is enough to fuel my stoke. I am not captivated by movie stars nearly as much as I am of those expat soul surfers that roam the globe or make due with a camper under a palapa and take their spot in the lineup next to the locals. I can imagine that life…not 100% sure I want it for myself, but I can understand the draw of the waves…and the lifestyle.
My surfing lifestyle is about the little adventures, all the people, places I now know or will, and experiences I have in and out of the water. It’s about seeing the sea life in their home, sharing waves with family and friends, it’s about that cup of coffee with a friend in the parking lot while our boards and board shorts are still dripping, or pulling my dress shirt on at the beach access as I ready myself for the office after a dawn patrol session. Everything seems to evolve and connect to surfing for me now…or more appropriately the surfing lifestyle. And sure, I do have some surf brand clothes, I have surf racks (that I use) on my car, and in fact I can proudly report that an 11’2” board will fit inside the minivan…oops…I mean the Surfari Wagon. Maybe the most rewarding part of the surfing life is all the powerfully good work that surfers and surfing related organizations do for our neighbors in need, the environment and for children who could use a little hope in life. Show me a group that is more giving. Yes, surfing is giving me the life of the rich and famous…a rich surfing life and my son thinks I writing for Local Sessions makes me famous. Send comments, suggestions, complaints, and requests for how to pimp your minivan to writteninwax@gmail.com …see you in the water.
Posted by Larry at 1:42 PM No comments:

Water Time by Weisbecker...check it out!

If you want to help me support local surfer inspired charities, donate here

Madsen bike for my surfboard would be cool